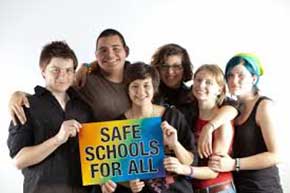 Safety is at the top of the priority list at the Metropolitan School District of Lawrence Township in Jacksonville. “Safe schools are everyone’s business. We all have to work together to resolve common issues,” states Assistant Superintendent Duane Hodgin. Teachers, students, parents, and the community–all are cooperating partners working for safe schools in the district.

Four years ago, motivated by rising violence around the country, the district enacted a safe-schools plan for grades K through 12. With key elements of prevention, intervention, education, and involvement of everyone, the plan helps the district be prepared.

A district with a diverse population and economic extremes, Lawrence Township was the first in Indiana to have a board-adopted safe-schools policy. It was also first to have a crisis intervention plan in case of incidents such as the taking of student hostages or student unrest.

An important part of the safe-school plan is having “police support officers” on the high school premises but outside the buildings. The trained, off-duty police officers are available by radio if they are needed inside. “While their role is to help, serve, and prevent, their visible presence contributes to security,” says Dr. Hodgin. Since the program began, vandalism has been almost wiped out, and there have been no guns on campus, he noted.

While the school district acknowledges that there are gangs in the area, it doesn’t cave in to gang behavior at school. There are little ways, such as banning hats in school, and major ways, such as working with an area gang task force.

What also counts is education for both teachers and students. Drug education and education about bullying are two prime topics. And the school trains students as peer mediators so that when disagreements arise, those involved can refer themselves to peer conflict management programs.

What this adds up to is a feeling of security. In a recent survey, most district high school students said they wanted law and order, and they overwhelmingly approved of the police support officers. Ninety percent reported feeling safe. Dr. Hodgin notes, “From analyzing the data, we know we’re making a difference.”