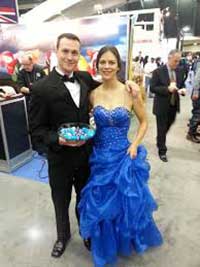 The theme song of the seventh edition of Extracts could well be “Talkin’ About an Evolution.”

In addition, trends kicked off at the last edition of the semiannual trade show — which showcases aromatherapy, fragrance and personal care products — also continued to develop, with all-in-one kits, one of the most popular trends of past shows, expanding significantly. The baby items from past exhibitors also grew to embrace infants’ older siblings, like the Miss Molly kiddie makeup line, an Australian firm represented at the show by Naked Earth.

The show itself is evolving, drawing more international exhibitors and buyers than ever, said Aubin Wilson, show manager for Extracts, who said that 243 exhibitors representing about 500 lines attended this show. Last October’s edition showcased 150 companies with 350 lines. Due to retailer buying patterns, the October show often draws a slightly smaller crowd, Wilson noted.

The show also included exhibitors from 11 countries outside the U.S., including China, Jamaica, Spain and Australia. “To date, this is the largest group of international exhibitors we’ve had in the market,” said Wilson.

Extracts attracted about 2,500 showgoers on its own — not to mention crossover traffic from the estimated 5,000 attendees of the New York Home Textiles Show being held next door, said Wilson.

Those wearing Extracts badges included buyers from specialty, chain, department and gift stores, with teams from Nordstrom, Bloomingdale’s, Macy’s and countless specialty stores spotted shopping this show. And while Extracts has traditionally been about upscale bath, body and aromatherapy products, an increasing number of moderate-priced options also drew mass merchandisers and drugstore buyers.

“Compared to past Extracts shows, we wrote a lot more business,” said Jennifer Welte, national sales manager for exhibitor Lafco New York. “Usually, it’s a wonderful show for making initial contacts — you get the ball rolling, and you do more business down the road. While there were those same types of contacts at this show, we wrote a lot of orders. People were really hungry for something new, and a lot of them seemed to come in with a spring-cleaning attitude, saying `Show me what’s new.”‘

Welte saw big results from Stuf, a junior cosmetics and bath line it has just begun to import from Australia, and Korres, a natural skin care line it brings in from Greece. All-in-one beauty kits were more popular than ever, with many picking up on themes that were in demand at past markets, like children’s products and bridal items.

The Jaqua Girls’ newest offering was the Bridal Party Spa Kit, capitalizing on the hot bridal trend seen at this market. Wildly Natural combined the kits and children’s themes to come up with The Creative Parenting Kit, which included four aromatherapy sprays with names like Monster B Gone and Sleep E Head.

Ph7, whose booth was packed with more than 20 kits with themes ranging from home spa to pampering pets, also picked up on the kiddie theme with its Tub Time Kids Bath Kit. Debby Dee’s Glam in a Can and Relaxation in a Bag’s Ultimate Relaxation Kit continued the all-in-one idea.

Retailer Ian Ginsberg, president of Manhattan’s C.O. Bigelow Apothecaries, believes that the continuing popularity of these kits has to do with their gift possibilities. “First of all, they’re easy for self-service selling in retail stores, and they’re also a natural on Internet sites,” he said. “In fact, this show appeared to have more products than ever geared to self-service selling.”

Jennifer Turner, buyer of fragrances from the Davenport, Iowa-based Von Maur chain of upscale specialty stores, picked up the Jaqua Girls’ Bridal Party kit and several kits from Lucky Chick. “Kits are flying off the shelves for us,” she said. “Consumers see them as a way to try lots of different new products for a reasonable price, and they’re also buying them to give as gifts. This is a trend that will continue to grow.”

In addition to showcasing upscale product lines, Extracts also gives upstart companies a chance to shine. And there were several relative newcomers at this show — including Rubb Inc., a just-over-a-year-old bodycare company founded by Brian Rott and Robyn Statman. The duo showed off the second item in their line, the Seven-Day Fix Kit. The kit, which retails for $25, offers travel sizes of the seven fragrances of its original product, Hey Slick Massage Oil, which was picked up by Fred Segal, C.O. Bigelow and Henri Bendel last fall.

For the first time, Extracts featured a luxury packaging segment, which was intended to draw a new attendee pool, including manufacturers’ research and development teams and packaging consultants, said Wilson.

Thirty companies made up the luxury packaging segment, which included a range of upscale packaging items from tins to ribbon. One supplier, Asia Overland of Hell, Mich., even showed boxes made entirely of cloves.

“Extracts was definitely trying to do a sort of Luxe Pack thing,” said Ginsberg. “It was a nice service for us, because we have an import company, Bigelow Trading. But I’d guess that these vendors wrote more business with other exhibitors than they did with attendees. That segment also seemed to draw in more package designers than ever.” Judging from exhibitors’ booths, the most popular packaging appeared to be glass bottles with silver tops — they appeared in countless lines, from the Good Home Company to We Live Like This.

Another new component of this show was a Natural Products pavilion, which devoted 2,310 square feet to 20 companies featuring products with natural origins. Exhibitors in this area included Borlind of Germany, Native Scents and Aromaland. According to Wilson, the key purpose behind the natural area was to attract a new segment of buyers, particularly those from the spa and health food industries.

Due to the response, both the Luxury Packaging and Natural Products sections will become permanent features, said Wilson. The Natural Products section will be repeated and expanded this fall. Due to packaging-buyer trends, the Luxury Packaging section will be a once-a-year feature, appearing again next April, said Wilson. In the fall, Wilson said, the show will introduce a third section, New Resources, which will be devoted to companies making their Extracts debut.

“Bath and body is not the largest part of our business, but it’s a strong part,” said retailer Peggie Galvin, merchandising manager for Strouds, the California-based bed, bath and linen chain. Galvin, who noted that upscale soaps are a strong seller for Stroud’s — whose soap suppliers include California’s Primal Elements, a longtime Extracts exhibitor — was spotted shopping for soaps at Bean’Stalk, a new Canadian soap firm.

Soap wasn’t the only thing the market had to offer these buyers, however. There was a growing trend toward linen sprays and washes, designed to appeal to home-store and gift-store buyers. Linen washes were offered by a number of firms, including the Good Home Company, Edith Mezard and L’Occitane.

Ex Voto was another favorite among buyers. The five-year-old Paris-based bath, body and tabletop firm made its American debut at the show, offering a variety of products from glass-bottled bath items to Japanese table accessories.

There were also quite a few dot-com buyers at the show. Alison Weil, director of leg care for Gazelle.com, a hosiery Web site that is beefing up its beauty stockkeeping units, was looking to increase her beauty assortment in general, and also was shopping specifically for Mother’s Day gift components. Weil, spotted shopping at the Australian Steamboat Connection booth, scoped out the lines the company represents in the U.S., including Australia’s Bloom Cosmetics and We Live Like This, a bath and body firm based in the United Kingdom.

Weil snapped up mesh bags, beach thongs and Bloom nail polishes, among other things. “I’m really pleased with the variety I’m finding at this show,” said Weil. “I’d love to get more brand names up on the site.”